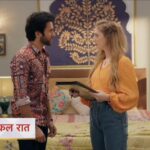 Star Plus popular serial Anandibaa Aur Emily is gearing up for some intense drama and interesting twists in the upcoming story. Previously, Aarav and Riddhi faked their marriage while Anandibaa accepted them.

Meanwhile, Gunjan found about the contract in between Riddhi and Aarav. She decided to use it against them to bring Pinky back into the house. Whereas, Jaman and Payal investigated against Riddhi and found about her lies.

In the current track, Aarav goes to meet Emily on her birthday and gives her a beautiful surprise. She gets elated upon seeing him and both expresses their love towards one another. Emily recalls her promise to Anandibaa and keeps her distance with Aarav, while he makes a promise to Emily.

Here, Aarav determines to bring Emily back to Sanghanis house as soon as possible. Meanwhile, Gunjan confronts Riddhi and ask her about the contract. The latter stays silent while Gunjan instigates her against Aarav and Emily.

Gunjan forwards her hand to join hands with Riddhi but the latter denies her offer. Gunjan tries to manipulate Riddhi’s mind while the latter determines to keep Emily away from Aarav. She also hides the truth from him while he reminds her about their deal and ask her to be the worst daughter-in-law.

Ahead, Riddhi does all the work and impressed Anandibaa while Aarav gets furious at her. He scolds her and reminds about their deal while she makes some excuses and ask him to have faith on her.

Emily gets a message that her visa is about to expire and gets shocked. jaman calls Aarv to notify him about it while Riddhi picks his call. Jaman tells Riddhi about it and ask to tell Aarav regarding it.

Later, Gunjan confronts Riddhi and learns about Emily’s visa. She proclaims that Riddhi will be able to get Aarav only if Emily will go out of his life. Riddhi agrees to join hands with Gunjan and both plans to separate Aarav and Emily.

Now in the upcoming episode, Aarav will confront Riddhi and proclaims that he only loves Emily. He will say that Emily understands the real meaning of love, while Riddhi will state that she loves him prior then Emily.

Aarav will tell that Emily knows love is not about getting but it’s also about sacrificing. He will state that Riddhi won’t understand it, to which she will ask Aarav to tell Emily to leave him. She will proclaim that she won’t let anyone come in between her and Aarav, while he will glare at her.

Will Riddhi’s true intentions gets exposed?

Will Aarav and Emily be able to tackle Riddhi?