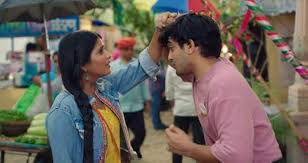 As reported earlier Hemant makes Yuvan sit in the car forcefully. Yuvan asks Banni to stop it as she promised him. Banni stands helpless. Manini says why Devraj didn’t come yet. Kalpana says he looks angry and I don’t think he will come to stop you. Yuvan cries holding Banni hand. Manini thinks her plan gets spoiled if Devraj didn’t come.

Banni conveys Yuvan’s pain to Devraj and tells him that he can’t stay away from Yuvan. Car is about to leave the mansion. Devraj stops the car and asks them to not separate Yuvan from him and agrees to Yuvan’s marriage with Niyati. Yuvan hugs Devraj and holds Banni hand. Later in the night, Banni shares to Vishnu how much she felt pain when they are separating Yuvan from her and he became an important person to her.

Yuvan tells Devraj that he wants to grow up quickly so no one can separate them and he tells him he doesn’t want to marry that bad Pari. Devraj thinks about how to stop the marriage. Banni says tomorrow he is getting engaged.

Vishnu asks why he looks stressed. Banni says don’t know whether they can make me meet Yuvan or not post marriage. Niyati congratulates Manini.

Manini asks Niyati to win Devraj and Yuvan trusts to win their hearts then only we will get the property to finish our deal. Manini gifts Viraj a watch and tells him that she won’t forget his favor and makes him get his share of the property.

Viraj says that’s why he trusts her more than his mom. Niyati asks Manini how to manage Banni. Manini tells Niyati that she will make Banni leave from here.

In the upcoming episode, viewers going to witness Niyati will record how Banni is preparing food plate for Yuvan. Banni will challenge Niyati saying she won’t come to feed Yuvan if she feeds him. Niyati will accept the challenge and tries to feed food to Yuvan. Banni, Devraj, and Manini will look at them with anticipation.

Who will win the challenge?

Can Niyati get successful in her plan?