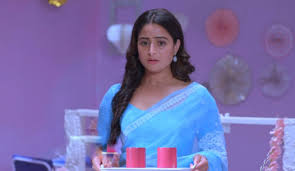 The gripping storyline of Star Plus popular daily soap Ghum Hai Kise Key Pyaar Meiin, filled with twist and plots; makes it engaging to the audiences. Previously, Pakhi ployed against Sai and proclaimed to become her and Virat’s surrogate in order to seek his affection. Whereas, Vaishali tried to stop her but becomes unsuccessful and gets convinced to help her daughter.

In the current track, Pakhi disguises herself to meet Geeta and Yogesh. She tries to manipulate them against Sai and lies that she came from the hospital. She ask them to sign a legal document and scares them telling about fake informations regarding the surrogacy procedure.

Here, Pakhi tells that if anything happens to the baby then Geeta will be responsible for it and she will be punished and even have to pay the compensation money. Yogesh gets shocked hearing it, while Pakhi also tells that sometimes the baby doesn’t even match the surrogate mother and so causes danger to her life.

Geeta decides to talk to Sai regarding it and shows her full faith towards the latter. Pakhi gets scared and tangles them in her web of lies. She makes them talk to Vaishali and declares that she is also a victim of such case.

Ahead, Sai and Virat gets restless waiting for Geeta. They becomes tensed, while Bhavani keeps taunting them for trusting an outsider rather them Pakhi. Sai ask her to stay quiet, while Virat takes a stand for Sai and goes against Bhavani.

Sai decides to find Geeta, while the doctor gives them a time limit. She declares that the egg is already unfreezed and they won’t be able to repeat the procedure again. Whereas, Sai gets attacked by goons and gets hot on her head. She falls unconscious, while the goons takes her bag and switches her phone off.

Later, Yogesh denies Geeta to help Sai and prohibits her from becoming a surrogate. He thanks Pakhi thinking her to be their well-wisher while she smirks and goes away from there. Meanwhile, Bhavani tries to convince Virat to take Pakhi’s help, as he couldn’t able to contact Sai or Geeta.

Now in the upcoming episode, Virat will tell the doctor that Sai is missing. She will get annoyed as he tries to go away in order to find Sai and Geeta. She scolds him for giving excuses and declares that she won’t be able to do anything if Geeta won’t reach their on time. She will proclaim that Virat and Sai won’t be able to become parents if they miss this chance.

Whereas, at that time Bhavani will come there along with Pakhi. The doctor will ask the nurse to start the procedure, while Virat will get shocked seeing her.

Will Virat let Pakhi become his and Sai’s surrogate?