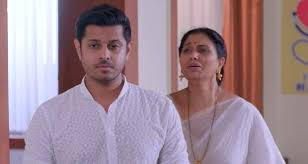 Episode starts with Virat getting ready to go to his office. He tries to overcome his emotions, while Ninad comes inside his room and questions him about being ready before his duty time. Virat tells that he wasn’t getting sleep and so decided to go for his work early. Ninad understands his situation and ask him to come to a restaurant. Virat gets confused with Ninad’s behaviour, while the latter says that he wants to have some private conversation with him.

Here, Virat agrees to go along with Ninad and visits the restaurant. They both sits on their table and orders their snack, while surprisingly Pakhi also comes there. She sees them and gets worried thinking that what they will think about her, as she was dressed in a fancy outfit. She hides herself from them and decides to go away without meeting Rohan.

Ninad starts his conversation with Virat and ask about the differences in between him and Sai. Pakhi gets alert hearing their conversation and decides to eavesdrop. She sits opposite to their table and hides her face from them. She also orders her snack, in order to not get caught.

Elsewhere, Ninad ask Virat to consider him as his friend and insists to tell about his emotions. Ninad confronts about Virat and Sai’s relationship after the miscarriage and ask Virat to pour his sadness out. Whereas, Virat gets teary eyes thinking about Sai and the baby which they lost. He shares his emotions with Ninad, stating about his feelings.

Virat tells how he and Sai dreamed about welcoming their baby into the world. He states that everything shattered away and he is left with nothing. Ninad questions that if he consider Sai responsible for everything? To which Virat denies and says that she is also suffering just like him.

Ahead, Virat tells that he can feel Sai’s pain and wants to console her too, but he couldn’t able to go near her. He continues that he feels a lot of pain inside his heart, whenever he thinks about their lost baby and couldn’t able to mend his relationship with Sai anymore.

Sai checks the patients, while nurse follows her. A newborn baby keeps crying, while Sai takes hold of her and soothes her. She makes the baby smile and imagines Virat along with her playing with their baby. She comes back to the reality and gets emotional, while the nurse consoles her. Sai busy herself into work in order to avoid thinking about her miscarriage.

Further, Virat tells about the feeling which is stopping him from going near Sai after the miscarriage, while Ninad ask him to stay strong. He also tells Virat to make a choice in between the options given by Sai. Whereas, Pakhi gets elated thinking about the difference in between Sai and Virat and decides to take advantage of it. She shares her wicked ploy with Vaishali, while the latter gets shocked. Pakhi decides to go back to Chavan house in order to get Virat.

Precap:- Sai and Virat sings lullaby and prepares the cradle for their baby. They gets excited to welcome their child, while Pakhi smirks and holds baby bump. She determines to snatch all the happiness from Sai and declares to keep the baby to herself.