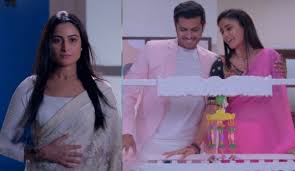 Episode starts with Sai visiting Pakhi and returns all her sarees. Pakhi questions that if Sai still doesn’t trust her? She clearifies her intentions and says that she only wants good for Sai and Virat. She proclaims that Sai have hurted her feelings by not accepting the sarees, while the latter replies that she just wants Pakhi to wear her sarees in future. She says that life is really long and Pakhi should have to move on from her pain. Whereas, Pakhi accuses that Sai still doesn’t trust her, to which the latter replies that she isn’t suspicious about Pakhi but her changed behaviour feels weird to her.

Here, Sai states that she couldn’t able to comprehend the fact that Pakhi is changed and wants good for her and Virat. Pakhi declares that Sai is getting her wrong and proclaims that she doesn’t have any hard feelings for her. She also tells that she won’t move on in her life as she loved Samrat and won’t be able to remove him from her heart.

Pakhi taunts Sai stating that she lost her baby and won’t be able to become a mother again. She tells that she adviced the family only because she isn’t sure about Sai’s decision of surrogacy. She ask Sai not to take her advice in any other way. Sai replies back that Samrat is in there heart also and everyone will always miss him. She also tells that the surrogacy decision was made by her and Virat.

Elsewhere, Sai prohibits Pakhi from interfering in between Virat and her life. Pakhi says that she only think good about Virat and Sai’s relationship and ask her mother to tell Sai, to which Vaishali li s in front of Sai and supported her daughter. She thinks in mind that about the truth of Pakhi.

Sai gives a warning to Pakhi and ask her to stay away from Virat and her. She declares that she won’t soare Pakhi if she tries to create problems in between Virat and her, as after a lot of difficulty she managed to get everything normal in their relationship. She shares her pain if losing her child and requests Pakhi to stay out of their decision.

Ahead, Sai goes to the hospital and treats the patients. One women shows her gratitude towards Sai for saving her husband and praises Sai’s behaviour. The nurse tells her about the problems Sai is facing, while th women prays for Sai’s well-being. Meanwhile, Vaishali ask Pakhi to stop her drama, she says that Sai is suspicious about her and will surely expose her.

Pakhi remains unaffected and gets an idea to become Sai’s surrogate, while her mother gets shocked hearing it. Meanwhile, Bhavani shares her worry with Sonali and Karishma. She couldn’t able to find a suitable surrogate for Sai and Virat’s child, while Sonali taunts her. At that time Pakhi comes there and offer to help them. She takes her name in order to carry Sai and Virat’s child, while they gets shocked. Bhavani composes and agrees to Pakhi’s idea and appreciates her.

Further, Virat surprises Sai in her hospital and then takes her on a drive. She gets a call from home and they both returns back. Bhavani declares that she wants to do an important talk and tells that she have selected the surrogate for Sai and Virat’s child. She reveals about Pakhi’s name, while everyone gets shocked.

Precap:- Pakhi tells that she is trying hard to mend her relationship with Sai, but the latter isn’t ready to forget their past. She states that Sai is doubting her intentions, when she just want is to do friendship with her. Whereas, Sai declares that she can never trust Pakhi as she just want to destroy her happiness.

Whereas, Virat shouts at them to stop and takes a stand for Sai. He tells that if she doesn’t want Pakhi to be one their surrogate, then no one should force her. Meanwhile, Pakhi confronts Virat asking that he doesn’t have any problem if she becomes their surrogate? To which he gets silent and Sai looks at him.