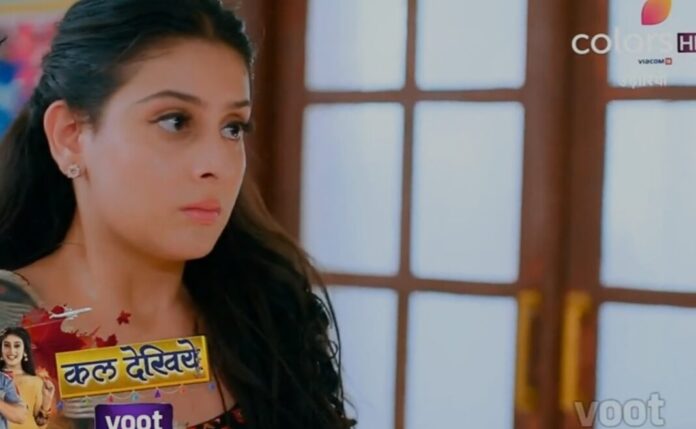 Colors popular show Udaariyaan is gearing up the drama with Jasmine paying for her crime in London whereas Tejo trying to find Nehmat’s real parents.

Previously it was that Manish and his mother confronted Jasmine about killing Manish for her dream to go to Canada. Jasmine denied any Manish. However, she got shocked when she saw Manish’s photo and remembered breaking up with him as he couldn’t take her to Canada and Manish committed suicide.

Yash’s mom slapped Jasmine accusing her of killing Manish. In India, Tejo tried to keep Nehmat away from the family so that they don’t get attached to her emotionally, but in vain.

Police arrived at the Virks with the parents who lost their baby in the hospital on the same day where Jasmine gave birth to her daughter and demanded to see the baby’s face.

Tejo and Fateh got tensed and held each other hands. The mother saw Nehmat and said it wasn’t her daughter since, unlike Nehmat, her laugh doesn’t have a mole on her neck. On seeing the mother leaving in tears Fateh and Tejo got determined to find Nehmat’s real parents and decided to enquire in all the hospitals.

Meanwhile, in Canada, Yash and his mother were torturing Jasmine by giving her jail-like treatment. Jasmine had enough. She decided to leave. Before leaving she threatened to get them arrested. However, Jasmine had to return after a while since Yash was having Jasmine’s passport.

Jasmine pleaded with Yash to give her passport. Yash denied it and said that she had to be in Canada as long as they want.

Yash’s mom gave her two sets of clothes to wear. Here in India Tejo confronted the doctor who did Jasmine’s fake delivery and asked her the whereabouts of the baby’s real parents. The doctor shocked Tejo saying that the baby didn’t have anyone who would search for her.

In the upcoming episode, it will be shown that the nurse who helped Jasmine in the fake pregnancy drama will threaten Tejo to tell police that Tejo stole the baby and got her arrested. In Canada Jasmine will take a knife and will look at Yash angrily. She will slowly come near him and will stab him.

Stay tuned to this space for the latest update on your favorite shows.