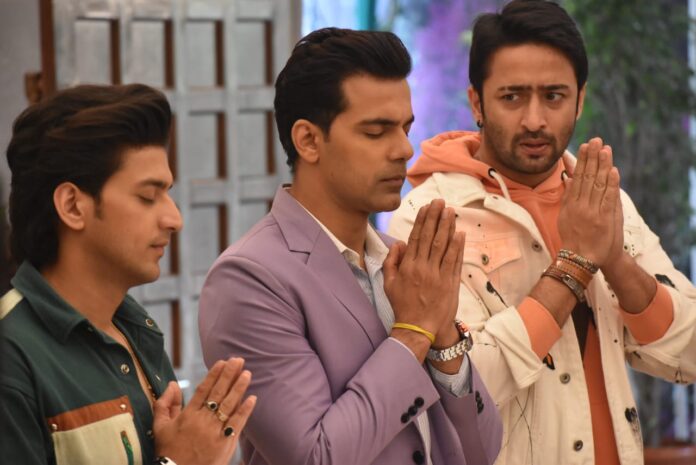 The Monday episode of Rajan Shahi’s “Woh Toh Hai Albelaa” started with Kanha dancing to “Kukkad”. Nakul also joins him. Sayuri was getting irritated seeing Kanha while Rashmi was enjoying their performance. Kanha then sees two students troubling Sayuri. He hits them and tells Nakul that even he troubles Sayuri but not like this.

At the Chaudhary house, Saroj is waiting for Cheeru to come. Dhanraj and Tej tell her that she should have at least asked Cheeru before talking about his marriage. She tells them that she asked him if he likes someone and he didn’t say anything. They then tell her there is a right time for every conversation and tell her he might have not felt comfortable sharing it with her then.

Meanwhile, Cheeru meets Sayuri at their secret spot and talks about how their relationship started from there. Cheeru asks Sayuri to give him some time and he will talk to Saroj about them. Just then Saroj calls Kanha and asks him to bring Cheeru home.

Kanha and Nakul find Cheeru’s car parked near the tree and call his name. Sayuri gets scared that he might come to know about them. Cheeru meets them and asks them to go back home and he will come on his own. Once they leave Cheeru meets Sayuri and promises her that he will talk to Saroj. They say “I love you” to each other, but Kanha is standing in the back and he sees them. He gets upset seeing them together.

In the upcoming episode, we will see that an upset Kanha finds a packet of Sayuri masala falling from Cheeru’s pocket. He goes to Sayuri and confronts her about the same. She tells him that she will only get married to Cheeru. To know what happens next, keep watching the show.