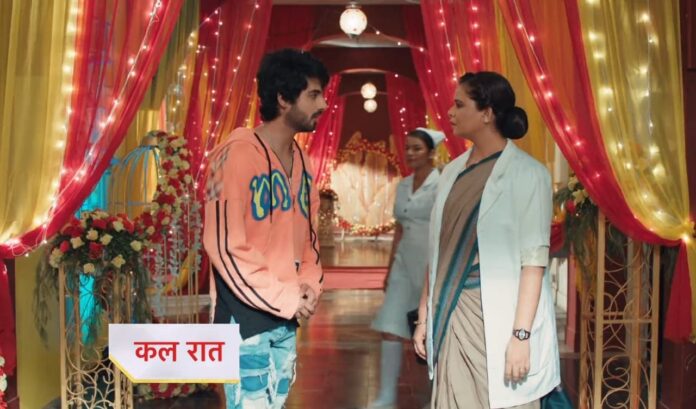 Episode begins with Venky holds Rudraksh before the latter falls down and thinks that now Rudraksh can’t expose him. Preesha comes there and gets relieved seeing Rudraksh. She thanks Venky for saving Rudraksh. He tells her that he knows the importance of Rudraksh in her life that’s why he can even sacrifice his own life to save him. Sharda praises him and blesses him. Preesha asks Rudraksh that is he doing fine. He nods at her and tells her that he is fine because Venky saved him. He thanks Venky and hugs him and murmurs that he won’t let him stop Mishka’s marriage. Venky replies that he won’t let him spoil his plan and he will ruin Mishka’s marriage for sure.

After some time, Preesha tells Rudraksh that she is glad that Venky was with him to save him. He asks her that how many times she is going to repeat that Venky saved her. She asks him that what’s bothering him. Vasudha informs Gopal that she is going to give the marriage gift to Mishka. Venky takes it from her saying that he will give it to Mishka and he moves towards Mishka’s room.

Rudraksh tells Preesha that someone troubling his friend’s family. She tells him that his friend should catch the culprit red-handed to save his family. He thinks to catch Venky red-handed after Mishka’s marriage. She tells him that he is really good person because he is doing so much for Mishka. He tells her that the latter is with him because Mishka helped him to catch Sania and Armaan that’s why.

Venky sees Rudraksh in Mishka’s room and leaves from there. Rudraksh waits outside Mishka’s room when she changes her dress. Venky thinks that if Rudraksh stayed with Mishka then he can’t execute his plan. Preesha informs Rudraksh that Saaransh is missing. Rudraksh gets worried and tells Mishka to lock the door and not open it for others.

Everyone wonders that where Saaransh went. Sharda shows the CCTV footage and they learns that Saaransh left the house. They goes out to find Saaransh. Venky lies to Mishka that Rudraksh send him so she opens the door. He tells her that Saaransh is missing so he should check it in her room. He enters the room and locks the door. She asks him that why he locked the door. He talks normally and tells her that he locked it because he don’t want anyone to leave the room which shocks her.

Rudraksh is about to call the Police but stops after hearing some noise. He finds Saaransh in the dicky of the car. Preesha asks him that how he reached there. Saaransh reveals that someone called him outside and someone locked him in the dicky.

Venky pushes Mishka on the bed. She tells him that Rudraksh already warned her and asks him to leave the room. She says to him that Rudraksh will come to save her. He recalls that how he used Saaransh to divert Rudraksh. He tells her that he is going to force himself on her.