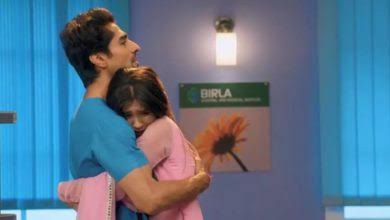 Star Plus popular daily soap Yeh Rishta Kya Kehlata Hai is all set to serve the audiences with a high voltage drama, along with the ongoing plot.

In the current track, Akshara clearifies her intentions to Abhimanyu about rejoining Birla hospital as the music therapist. Akshara also thinks about her other intention to be near him. She looks at Abhimanyu and tries to initiate a conversation, while he also gets restless in order to talk to her. Suddenly, Abhimanyu notices the chewing gun on Akshara’s hair and notify her about it.

Here, Akshara starts panicking learning about the gum and cries that her hair will get ruined. She insists him to remove it immediately and reminds him about his promise. He tries to calm her and makes her sit on the chair.

Abhimanyu gets some tools and successfully removes the chewing gun. Akshara gets elated and hugs him in excitement. She shows her gratitude towards him, but soon realises her action and moves away from him being embaressed.

Ahead, Bijoria invites Akshara and Abhimanyu to his party and forces them to attend it mandatorily. He gives them invitation cards, while they looks at each other being nervous. They tries to talk in order to know each other’s decision but gets unsuccessful.

Abhimanyu and Akshara hallucinates about one another while working. Whereas, Manjari gets elated learning about Akshara rejoining the hospital. Meanwhile, Harsh gets suspicious as Mahima calls Parth to the hospital. He ask his source to find about the matter.

Later, Mahima ask Parth to take Harsh’s place in the hospital but the latter gets shocked and denies it. He tells about his passion, while Akshara shows her support towards him. Whereas, Abhi along with Neil and Akshara tries to calm Parth but gets unsuccessful. Finally, Akshara gives him mouth organ and he plays it to relax himself.

Now in the upcoming episode, Abhimanyu will attend Bijoria’s party along with Neil and his family. He will look for Akshara but couldn’t able to find her.

Bijoria will confront him about Akshara, while Neil replies that she will also come. Whereas, Abhimanyu will make up his mind that Akshara won’t come and leaves the party. At that time Akshara will get inside the venue and look for Abhi, but gets disappointed on not finding him. She will also think that he won’t attend it and decides to leave from there. But, suddenly they will feel each other’s presence.

Will Akshara and Abhimanyu meet each other?