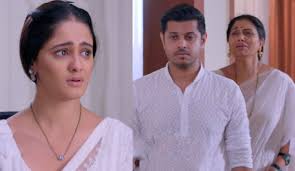 Star Plus popular daily soap Ghum Hai Kise Key Pyaar Meiin is unravelling lot many dramas with each passing day. The show is making the viewers curious, with its unpredictable storyline. Previously, Pakhi entered the Chavan mansion by threatening Bhavani and trapped all the members in her emotional drama.

She got to know about the rift in Sai and Virat’s relationship and decided to take advantage of it. She apologized to Sai for her behaviour and acted to be innocent in front of everyone, in order to gain their trust.

In the current track, Pakhi suggests an idea to Sai for convincing Bhavani. She even emotionally blackmails Sai to spend time with her and tries to gather information about Virat and her relationship. She finds that Virat doesn’t sleep with Sai and gets happy. She decides to use the situation in order to break their relationship.

Here, Ashwini and Ninad talks about Sai and Virat’s condition and worries about them. They decides to convince Virat for surrogacy, while Ashwini notify that Bhavani was about to have a conversation with Virat regarding the matter.

Ashwini and Ninad also gets suspicious about Pakhi’s changed behaviour and states that they can’t trust her intentions. Ashwini gets irked thinking about Pakhi and prays that she couldn’t able to create any misunderstandings in between Virat and Sai.

Ahead, Pakhi lies to Bhavani and makes her emotions to convince her for Samrat’s birthday celebration. She apologises to Bhavani and tells that she can understand her pain. Whereas, Shivani appreciates Pakhi for being strong. Whereas, they decorated the house to celebrate the birthday.

Bhavani gets furious at Vaishali as she talks about Pakhi’s second marriage, as instructed by Pakhi herself. Whereas, Mansi clearifies that Pakhi doesn’t want to leave them. Meanwhile, Virat risks his life to save Pakhi from fire.

Later, Pakhi shares her emotions in front of Samrat’s potrait and thinks that he will always support her. Whereas, Sai brings a surprise for Virat, while everyone looks at her curiously.

Now in the upcoming episode, Sai will ask Virat to sleep on their bed and tells that she will go to some other room. Virat will stop her and says that her surprise made him realise his mistake and ask her to sleep with him. Sai will get elated, whereas Pakhi will go to the room where Virat used to sleep and gets worried on not finding him. She will become tensed thinking that the differences in between Sai and Virat will get over.

Will Pakhi be able to take advantage of Sai and Virat’s rift?